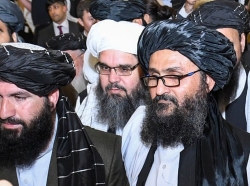 Donald Trump has spoken by telephone to a senior Taliban official at a time when a row over prisoner exchanges and a fresh outbreak of violence jeopardised a historic US-Taliban peace agreement signed on Saturday.

The conversation between Trump and the head of the Taliban’s political office, Abdul Ghani Baradar, was the first direct exchange between a US president and the insurgent leadership since the US military intervention in Afghanistan began in 2001.

The Taliban said the call between Washington and Doha (where the Taliban negotiating team are based) lasted 35 minutes and claimed that Trump told Baradar: “You are a tough people and have a great country and I understand that you are fighting for your homeland. We have been there for 19 years and that is a very long time and withdrawal of foreign forces from Afghanistan now is in the interest of everyone.”

Trump confirmed the conversation but gave few details about the discussion with the man he mistakenly referred to as “the leader of the Taliban”.

“We had a good conversation. We’ve agreed there’s no violence. We don’t want violence. We’ll see what happens,” Trump told reporters. “We had actually a very good talk with the leader of the Taliban.”

“The relationship is very good that I have with the mullah,” he added later in the day.

“We had a good long conversation today and, you know, they want to cease the violence. They’d like to cease violence also.”

The US signed two agreements on Saturday: one with the Taliban, offering the full withdrawal of foreign troops in 14 months if the insurgents take part in comprehensive intra-Afghan peace talks, and a joint declaration with the Afghan government, about the need for negotiations with the Taliban and to combat terrorism.

Discrepancies between the two agreements quickly became apparent. The deal with the Taliban states that up to 5,000 Taliban and up to 1,000 government soldiers would be released by 10 March, when intra-Afghan negotiations are due to start.

The agreement with the government talks more vaguely about “determining the feasibility of releasing significant numbers of prisoners on both sides” as a confidence-building measure.

The Afghan government has said it had not agreed to the release of 5,000 Taliban fighters before talks with the insurgents begin, and the Taliban has insisted it will not start negotiations without the prisoners being freed.

On Monday, the Taliban said it was returning to military operations following a week-long “reduction in violence” in the run-up to Saturday’s agreement with the US.

On the same day, a motorcycle bomb attack at a football match killed three people and injured 11 in the eastern province of Khost. There was no claim of responsibility for the attack, and the Pentagon played down its significance as a threat to the US-Taliban deal.

According to the Taliban account of Tuesday’s phone call, Trump assured Baradar that he had asked his secretary of state, Mike Pompeo to talk to the Afghan president, Ashraf Ghani, “in order to remove all hurdles facing the intra-Afghan negotiations” and promised US aid for Afghan reconstruction.

… we have a small favour to ask. More people, like you, are reading and supporting the Guardian’s independent, investigative journalism than ever before. And unlike many news organisations, we made the choice to keep our reporting open for all, regardless of where they live or what they can afford to pay.

The Guardian will engage with the most critical issues of our time – from the escalating climate catastrophe to widespread inequality to the influence of big tech on our lives. At a time when factual information is a necessity, we believe that each of us, around the world, deserves access to accurate reporting with integrity at its heart.

Our editorial independence means we set our own agenda and voice our own opinions. Guardian journalism is free from commercial and political bias and not influenced by billionaire owners or shareholders. This means we can give a voice to those less heard, explore where others turn away, and rigorously challenge those in power.

We hope you will consider supporting us today. We need your support to keep delivering quality journalism that’s open and independent. Every reader contribution, however big or small, is so valuable. Support The Guardian from as little as $1 – and it only takes a minute. Thank you.