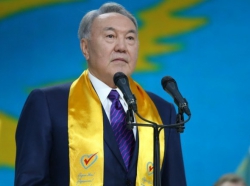 According to the Central Election Committee, over 95% of Kazakhstanis voted in the early Presidential elections on April 26. Nazarbayev thanked the voters for their active participation.

“Today is a big day. Kazakhstanis have once again showed the unity of multiethnic people that overcomes all the hardships. Almost the entire population went to vote in unison. I saw people with families, children and grandchildren standing in queues for an hour and even longer. I saw all of it. Tears welled up in my eyes. I realize the growing responsibility and think day and night of the ways to make our people’s lives better so that they can improve their wellbeing and look into the future with confidence,” Nazarbayev said.

“We showed (the world) that the Kazakhstani political culture stands for unity and responsibility. Everyone came to the voting bins. Electing a president means choosing your future. I am very grateful and bow in reverence before all the Kazakhstanis. We showed (the world) (how united we are). 850 observers from 37 countries and media representatives from 40 countries observed the elections,” Nazarbayev said.

During the press conference at Akorda, Nazarbayev apologised before the international observers for the high voter turnout on April 26.

“We live in an open society and criticism is inevitable. I have just met with observers, congressmen, lawmakers from other countries. They, too, stressed the positive aspects. Yet, I apologized, because for super-democratic countries 95% voters turnout and over 97% of votes for me are unacceptable. But I cannot do anything about it. If I had interfered, I would have been undemocratic,” Nazarbayev said.