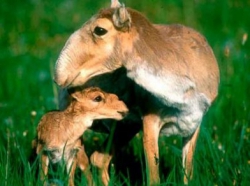 Russian Federal Service for Veterinary and Phytosanitary Surveillance has commented on the mass saigas die off in Kazakhstan, Tengrinews reports citing RIA Novosti.

The Russian Service discussed the National Referential Center’s suggestion that saigas were dying from pasteurellosis in Kazakhstan. However, the researches stated that the diagnosis was not confirmed.

So far, 112 475 saigas have died in Kazakhstan, it said. “The Federal Service for Veterinary and Phytosanitary Surveillance expresses concerns in this regard, because the reason for the die off could be uncontrollable spread of diseases like foot-and-mouth disease, PPR or sheep pox. Saigas are known to be migrating to Kazakhstan from Uzbekistan that has issues with these diseases,” the Russian service said.

Meanwhile, the Prime Minister of Kazakhstan Karim Massimov ordered a special governmental committee to study the situation and determine the reasons behind the tragic die off of the rare antelopes in Kostanay, Akmola and Aktobe Oblasts.

The die off began approximately at around May 11 with about 100 dead animals found in Amangeldinsk District of Kostanay Oblast. Since then the number of the dead animals has grown two thousand times exceeding 200 thousand dead representatives of the endangered species. The total number of the animals in Kazakhstan before the die off stood at 300 thousand saigas.

Saiga antelopes are among the species at risk of extinction. It used to inhabit vast areas of the Eurasian steppe zone but are now found only in three areas in Kazakhstan and one in Russia.