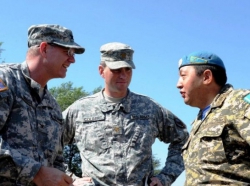 Ronnie Kelley arrived in Astana at the official invitation of the country’s Defense Ministry to take part in a conference of NCO corps of Kazakhstan’s Armed Forces.

He spoke about military cooperation between the two nations at the press conference organized by the US Diplomatic Mission to Kazakhstan on June 11. “Military is a great opportunity for cooperation between our countries. I look at it very positively. Both countries understand that there are bad things happening in the world we live in. And the more we work as a team, the more we cooperate, the stronger we will be. Our multinational countries will be able to resist a foreign aggression,” Ronnie Kelly is quoted as saying by Newskaz.ru.

“You are moving in the right direction, but there is no need to hurry. It is necessary to make thought through and consistent steps along the path of development. We have spent almost 250 years developing our army and NCO corps, while Kazakhstan has been doing that for about 20 years. I advise not to hurry and to learn from other countries,” he said.

When speaking about Kazakhstan’s military personnel, he marked the level of their training. “In those areas where I work, I can say that I am impressed by the level of training of Kazakhstan’s soldiers. They are constantly learning and striving to get better. This motivates me. I closely work with Command Sergeant Major of Kazakhstan's armed forces Temirbek Khalykov, who was the first Kazakh to graduate from the United States Army Sergeants Major Academy. I am inspired by his passion to make Kazakhstan’s army more professional. He has recently been added to the Hall of Fame of the United States Army Sergeants Major Academy as one of its best graduates. Few have managed to do that,” Mr. Kelley said.

He also spoke about a joint training program that enables Kazakhstan's military professionals to study at US military institutions.  “As for the International Military Education and Training (IMET) program, this is a long-term assistance program and we have with Kazakhstan’s Ministry of Defense. Under this program, Kazakhstan’s military professionals are able to train and study in the US. This program helps prepare a new generation of NCO corps. We have senior sergeants and professional instructors, who teach and share experience in special training centers,” Mr. Kelly said. To be eligible for this program Kazakhstan's military personnel should know English well, he added.

Besides, a sergeants drill course will kick off in July this year at the Cadet Corps of Kazakhstan’s Ministry of Defense in Schuchinsk. It last from six months to one year.

“It is unclear whether it will be prolonged next year. It is being discussed now,” Mr.Kelley said.