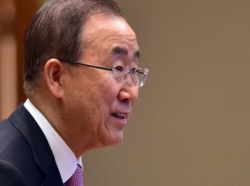 UN Secretary General Ban Ki-moon on Tuesday raised alarm over a $100 million shortfall in funding for the UN aid agency for Palestinian refugees and called for urgent donations, AFP reports.

Ban said in a statement that the UNRWA relief agency was "a pillar of stability" for five million Palestinian refugees at a time when the Middle East is in the throes of crises and suffering.

He called "on all donors to urgently ensure that the $100 million required be contributed to UNRWA at the earliest possible date so that the children of Palestine can begin their 2015-2016 school year without delay."

Ban has personally spoken to several world leaders in the past weeks about the unprecedented funding crisis at UNRWA, his spokesman said.

The United Nations has been struggling to keep several humanitarian efforts afloat in the Middle East -- in Syria, Yemen and also Iraq -- where donors are under pressure to boost contributions.

The war in Syria, now in its fifth year, has driven more than four million people to flee across the border to neighbouring countries, in what the UN refugee agency UNHCR has described as the single largest exodus in a generation.