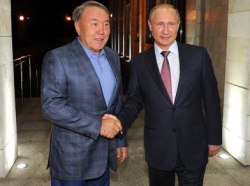 According to the President of Kazakhstan Nursultan Nazarbayev, food is the most stable currency in the world, Tengrinews reports.

Kazakh-Russian Interregional Cooperation Forum was held in the city of Sochi, Russia on September 16. The main topic of the forum was Russian-Kazakh cooperation in agriculture and food security.

"Food, the topic we are talking about today, is one of the most stable currencies, at the time when oil prices and prices of other commodities are low. Food will always be there. Both of our countries are agricultural and industrial. We have great opportunities. The real treasure of humanity, in the present and future, is agricultural sector. According to the UN, by 2050 the number of people in the world will exceed 9 billion, and one of the most pressing issues on the global development agenda will be: how to feed these billions. Kazakhstan and Russia, in this sense, have a priceless treasure - huge agricultural land and fundamental agricultural science with a lot of experience," Nazarbayev said.

Russia and Kazakhstan are among the largest grain exporters in the world. The countries’ primary export grains are wheat and wheat flour. According to Grain Market Report compiled by International Grains Council (IGC), in 2014-2015 Russian was the 4th largest exporter of grains, while Kazakhstan was the 8th among such countries as Argentina, Australia, Canada, the EU, Ukraine, and the USA. IGC forecasts a slight rise in Kazakhstan’s and Russia’s total export of grain to 6.9 million tons and 31 million tons (respectively) in 2015-2016, compared to 6.4 million and 30.6 million the year before.

According to President Nazarbayev, Kazakhstan and Russia have 435 million hectares or more then 10% of the world's arable land between the two.

Besides, both Kazakhstan and Russia are part of the Eurasian Economic Union (EEU) - an integrated market of 183 million people and a gross domestic product of over 4 trillion U.S. dollars that also includes Belarus, Armenia and Kyrgyzstan. One of the goals of the union is to implement common transport, agriculture and energy policies.

The two countries have long been toying with the idea of running a consorted effort at the global wheat market. The concept of the "grain pool" was floated back in 2009 at the World Grain Forum in St. Petersburg. It quickly gained official support from Russia, Kazakhstan and Ukraine, but has not seen much progress since.

Now, with the EEU in place, Kazakhstan and Russia are once again likely to become a joint powerhouse topping the strategic food market and dictating the price of bread.

“It is necessary to conduct a coordinated agricultural policy, first at the level of governments, agencies, and then at the regional level. We need to rip the benefit from our alliance by jointly protecting economic interests of our countries,” the Kazakh President said.

Kazakhstan does not want to stop at exporting grains only. It wants to diversify the agricultural products it exports and win new markets.

“The diversity of climate zones, fertile soil allow us to be competitive in many agricultural sectors. We produce wheat, rice, oilseeds, feed, meat, and dairy. Agricultural sector of our countries has a unique export potential,” Nazarbayev said.

As the sanction-war between the western countries and Russia continues, Kazakhstan has an excellent opportunity to get a share of Russia’s beef and milk market. On June 24, 2015 President Vladimir Putin extended the ban on imports of beef, pork, poultry meat, fish, cheese, milk, vegetables and fruit from Australia, Canada, the EU, the US, and Norway for another year, according to RT.com.

Therefore, at the Kazakh-Russian Interregional Cooperation Forum, Putin referred to agricultural cooperation between Russia and Kazakhstan as a win-win situation and said that the volumes of such cooperation would continue growing, Mir24.tv reports. President of Kazakhstan, in turn, confirmed that Kazakhstan was ready to move into the Russian meat and dairy markets, and went even further by saying that it could replace the import of Turkish, Polish and Chinese fruits and vegetables as well.

"Our country has enormous export opportunities for beef, the quality of which does not yield to the quality of beef of these countries. At the moment Kazakhstan produces about four thousand tons of beef per year. We are ready to increase the production of organic, chilled beef. (...) Kazakhstan is able to supply more than three thousand tons of chilled beef per year. For example, from western Kazakhstan, where we have developed feedlot for the markets of Samara, Saratov and Orenburg regions," Nazarbayev said.

In need of new technology and innovations

To further improve the efficiency of use of its arable land, step up its competitiveness and diversify its agricultural exports, Kazakhstan needs to introduce advanced technologies.

Despite being one of the world’s top grain suppliers, Kazakhstan lacks new technologies in agricultural sector. It has a potential to double or quadruple its grain output. Below is the table that compares the grain yield for Kazakhstan, Canada, and Australia (these countries were chosen for comparison because all three countries have some rather arid lands with very low precipitation).

These numbers clearly show that in comparison to countries with similar climate Kazakhstan harvests 2-4 times less grains. According to Nursultan Nazarbayev, EEU’s "agricultural sector is in need of innovations, modernization, and introduction of advanced technologies.

"Look at Israel. Having practically no fertile land or water resources, it supplies the world markets with fruits and vegetables. We eat all these berries – Israel's strawberries (...). We are already trying to introduce Israeli drip irrigation technology in Kazakhstan. Science and innovation have played an important role (in Israel). Are we worse? We can take several large regions and use them as bases to train our people to grow similar products. Therefore, I believe that the Ministries of Agriculture of our countries need to work on the creation of joint centers of agricultural innovations, which would deal with commercialization and industrial introduction of new technological solutions," President of Kazakhstan said.