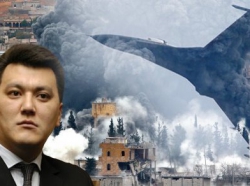 On Tuesday, Turkish forces shot down a Russian Su-24 fighter jet near the Syrian border, claiming that they had repeatedly warned the plane about airspace violation. However, Russia insists that it received no warning, did not violate Turkey's airspace and was hit by the missile while flying over Syria.

“Russian Su-24 aircraft was hit by air-to-air missile from a Turkish plane. It came under attack one kilometer away from the Turkish border and crashed four kilometers from the border. The Russian jet was fulfilling its mission to fight ISIS by making air strikes against terrorists. It is clear that Russian pilots and the plane did not threaten Turkey. Turkey stroke the Russian plane despite the Russian agreement with the US to prevent such incidents. The tragedy with the Russian plane in Syria will have serious consequences for the relationships between Moscow and Ankara,” Putin declared calling Turkey’s move “a stab in the back”.

According to Kazakhstan’s political scientist and Director of the Kazakhstani Institute of Strategic Studies Yerlan Karin, this is a point of no return in the Syrian crisis, Tengrinews reports.

“The Syrian crisis has now escalated to a new level and scale. Unfortunately, the ISIS has achieved its goal,” he wrote on Facebook.

He elaborated his point of view in an interview to Tengrinews. “The recent surge in the terrorist activity, all these attacks, incidents, anti-terror campaigns have led to what we feared the most - a further escalation of the conflict. As I have already said, the terrorist attacks in Paris and other parts of the world will only further drag these countries in the Syrian conflict. Earlier they were involved in the conflict directly or indirectly, but with all these attacks, including the crash of Russian A321 plane over the Sinai Peninsula, the involvement of these countries in the Syrian conflict has grown,” he said.

“The incident with the Russian plane shot down over the Syrian-Turkish border, is, so to speak, a new point of no return in this conflict. And, unfortunately, the Syrian crisis have advanced to a new level, a new scale after the incident. All these countries are moving further away from their initial agenda - fighting the terrorism - toward other issues,” Karin pointed out.

As for the future relations between Russia and Turkey, Karin believes that there chances of a peaceful settlement of this issue, but acknowledges that Moscow and Ankara are the most emotional actors in the Syrian conflict.

“Of course, opportunities to find a compromise and return to the initial positions always exist. But what raises concerns is that it is exactly what was expected. Therefore, the incident will have very serious consequences,” Karin concluded.

Following the crash, NATO, of which Turkey is a member, called an emergency meeting in Brussels on Turkey's request.