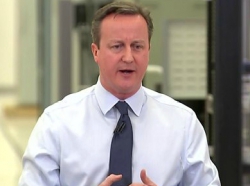 David Cameron is to attempt to persuade Conservative MPs to back a package of reforms he hopes will keep Britain in the European Union.

The PM will field questions in the Commons about the draft deal paving the way for the UK's EU in-out referendum.

He said it would deliver the "substantial change" he has been demanding to how the EU is run.

But some Tories are sceptical, with one senior minister telling the BBC's Laura Kuenssberg the deal was "a mess".

MEPs will also debate the UK's position when the European Parliament meets in Strasbourg.