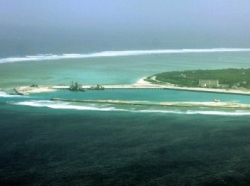 China has deployed surface-to-air missiles on a disputed island in the South China Sea, Taiwan said Wednesday, as Beijing insisted it had a right to build "self-defence" systems in the strategic region, AFP reports.

Taiwan's defence ministry confirmed the facility's existence after Fox News reported missile launchers had arrived on Woody Island, part of the Paracels chain, in the past week.

The report came as President Barack Obama called for "tangible steps" to reduce tensions in the region.

Beijing has controlled all of the Paracels, which are also claimed by Hanoi and Taipei, since seizing several from South Vietnam in a brief, bloody battle towards the end of the Vietnam War.

But tensions in the sea -- through which one-third of the world's oil passes -- have mounted in recent months since China transformed contested reefs in the Spratly islands further south into artificial islands capable of supporting military facilities.

Washington says the move threatens free passage in a strategically vital area and has sent warships to sail close to the disputed islands to assert that right.

Analysts said the latest deployment could be an attempt to deter such freedom of navigation operations (FONOPs). Australian military aircraft also routinely overfly the area.

He did not explicitly deny the deployment, but urged more attention on "the lighthouses we have built on some of the islands and reefs in the South China Sea”.

"Self-defence facilities that China has built on the islands,” Wang said, “are consistent with the right to self-preservation and self-protection that China is entitled to under international law”.

China established the tiny city of Sansha on Woody Island in 2012 to administer a wide swathe of waters and islands, creating an oddity that is by far the world's largest city by area but has a minuscule population of around 1,000 people.

In 2014, the country added a military airstrip to the island, saying it would "greatly improve Chinese defence capabilities".

In the Spratlys, China has set up runways capable of accommodating military aircraft on its newly-built islands, and is believed to have installed radar towers.

The Fox News report was based on pictures from ImageSat International, which earlier this week released images said to show reclamation work in the Paracels.

The missiles appeared to be the HQ-9 air defence system, with a range of about 200km (125 miles), according to reports.

Experts said they could be used to target enemy aircraft, and Kevin Cheng, editor-in-chief of the Taipei-based Asia-Pacific Defense Magazine, told AFP: "The... HQ-9... could exacerbate the nerves of neighbouring countries, particularly Vietnam.

"The military deployment could be seen to violate the US call for free navigation in the area and allow it more excuse to interfere in affairs there," he added.

Rory Medcalf, an Asian security expert at the Australian National University, said: “If this was meant to be a signal to deter FONOPs, I doubt it will succeed."

The Pentagon declined to confirm the Chinese missile deployment to AFP.

The report on the missile batteries came as Obama and the 10 leaders of the Association of Southeast Asian National (ASEAN), including Vietnam, issued a joint statement calling for the "peaceful resolution" of the myriad competing claims over islands, atolls and reefs.

The call followed a two-day summit in California where leaders voiced concern over Beijing's military build-up in the area.

"We discussed the need for tangible steps in the South China Sea to lower tensions," Obama said, calling for "a halt to further reclamation, new construction and militarisation of disputed areas".

In addition to the three Paracels claimants, the Philippines, Malaysia and Brunei have competing claims in the Spratlys.

Resentment still simmers in Vietnam over its territorial clashes with its giant neighbour, and on Wednesday it marked the 37th anniversary of a different border clash.

During a visit to Washington last year, Chinese President Xi Jinping pledged not to militarise the Spratlys, though he made no mention of the Paracels, and Medcalf said the latest move violated "the spirit, if not the letter" of that assurance.

The move, he told AFP, "reinforces the view that China intends to exert growing control in these international waters."